I recently acquired a Surface Pro 4 and it was instantly obvious what a great machine it is. Having a tablet for casual use, while still having the capabilities of a powerful computer that you can use with a normal keyboard and mouse is extremely convenient.

One of the first things that I wondered when I got the Surface was: how well will this thing run Linux? I can accept having to use Windows when I’m casually using the machine as a tablet, but when I really want to get work done, I am most comfortable in Linux. There were some difficulties at the beginning of installation, but once I was able to get started, installing Linux on the Surface was as easy as installing it on a regular laptop. 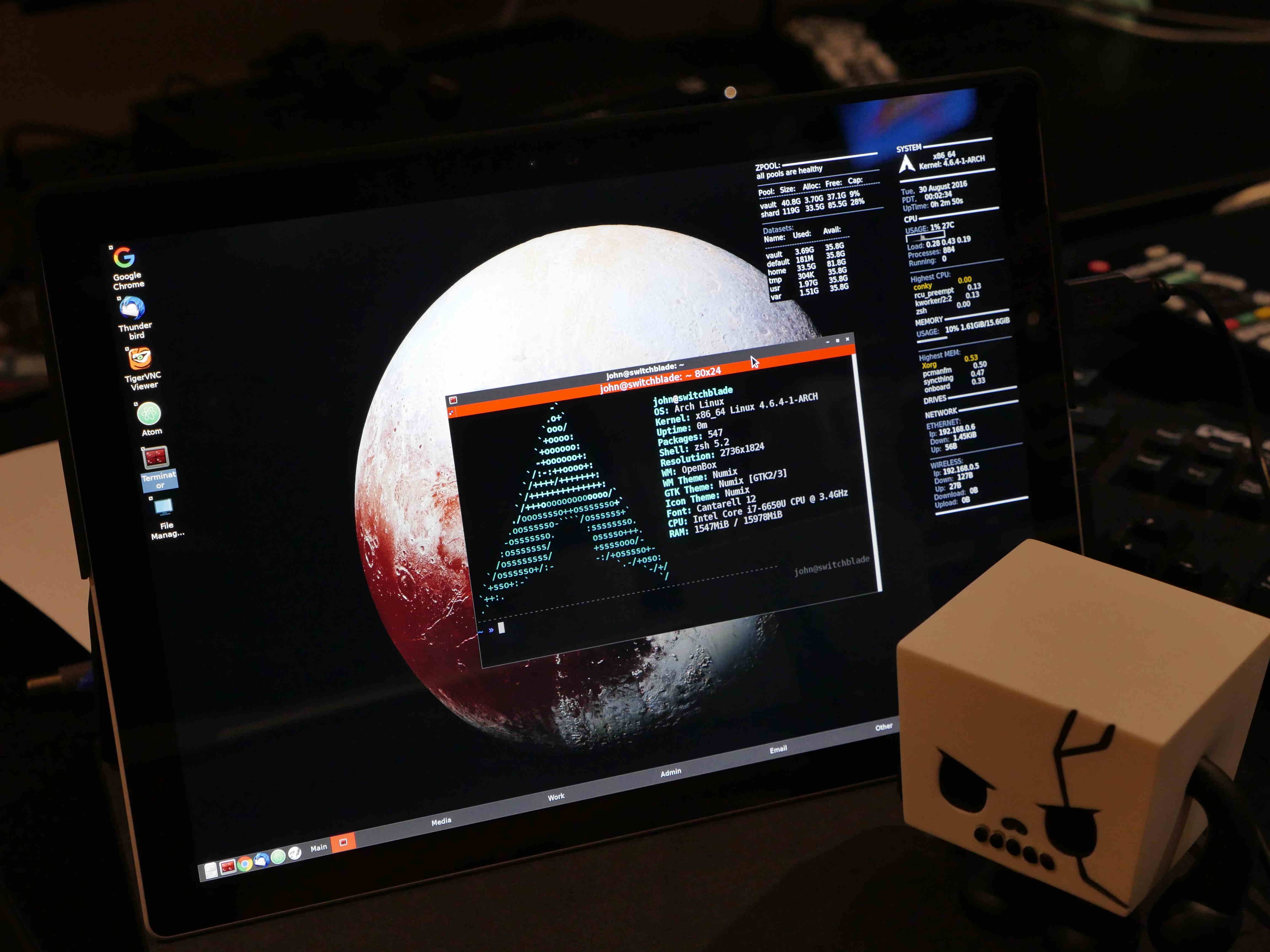 If you plan on keeping Windows around, the C drive must be shrunk to make room for Linux. Otherwise, you can skip to booting to install media. Even if you don’t plan on using Windows, currently the only way to get firmware updates is through Microsoft. If only just for updates, you may want to keep a small Windows partition.

Open the Control Panel and go to System and Security->Administrative Tools->Computer Management, then click on Storage, and finally Disk Management.

Select the main desk and choose to shrink the partition. 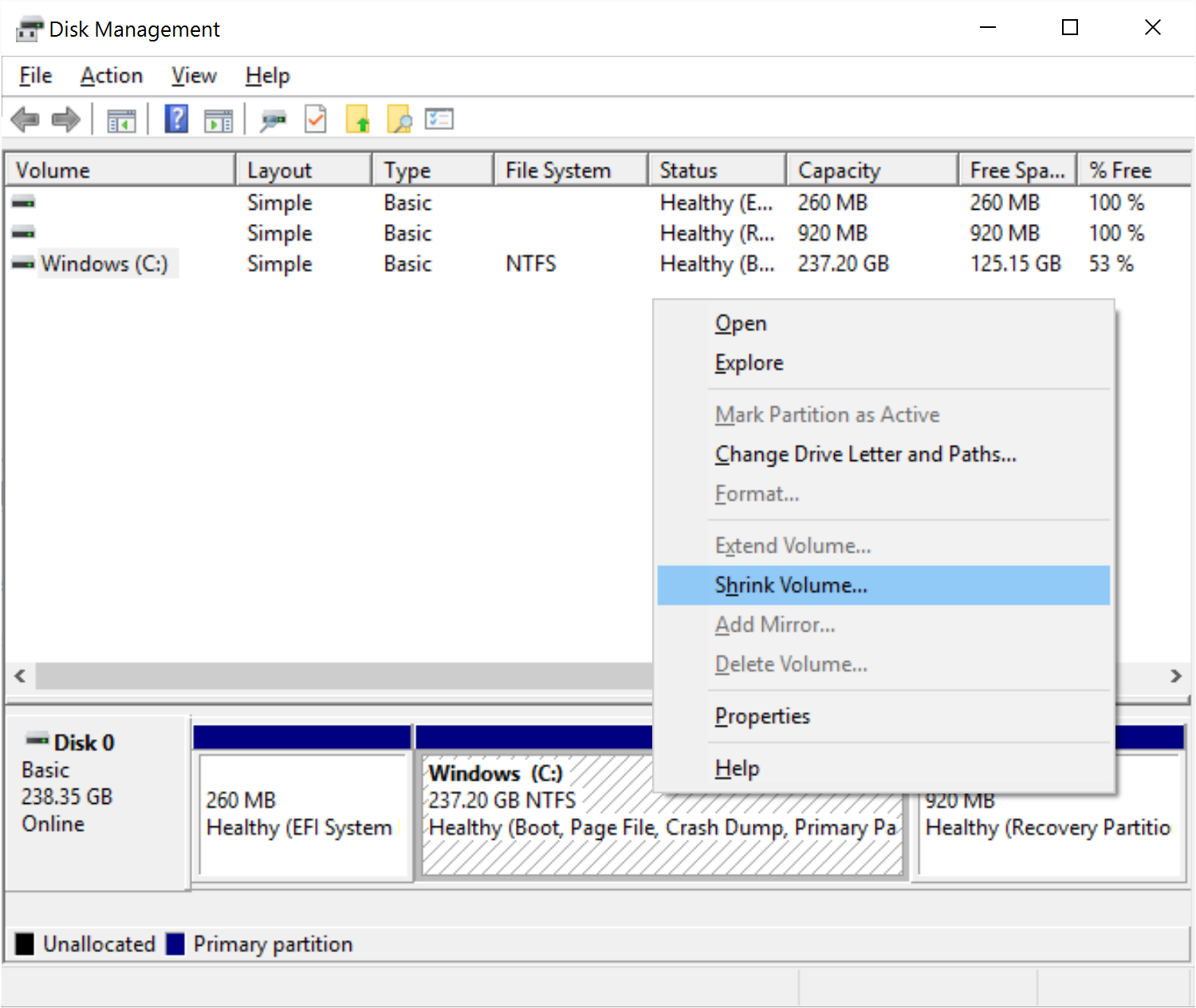 I chose to only partition off a 40GiB chunk. 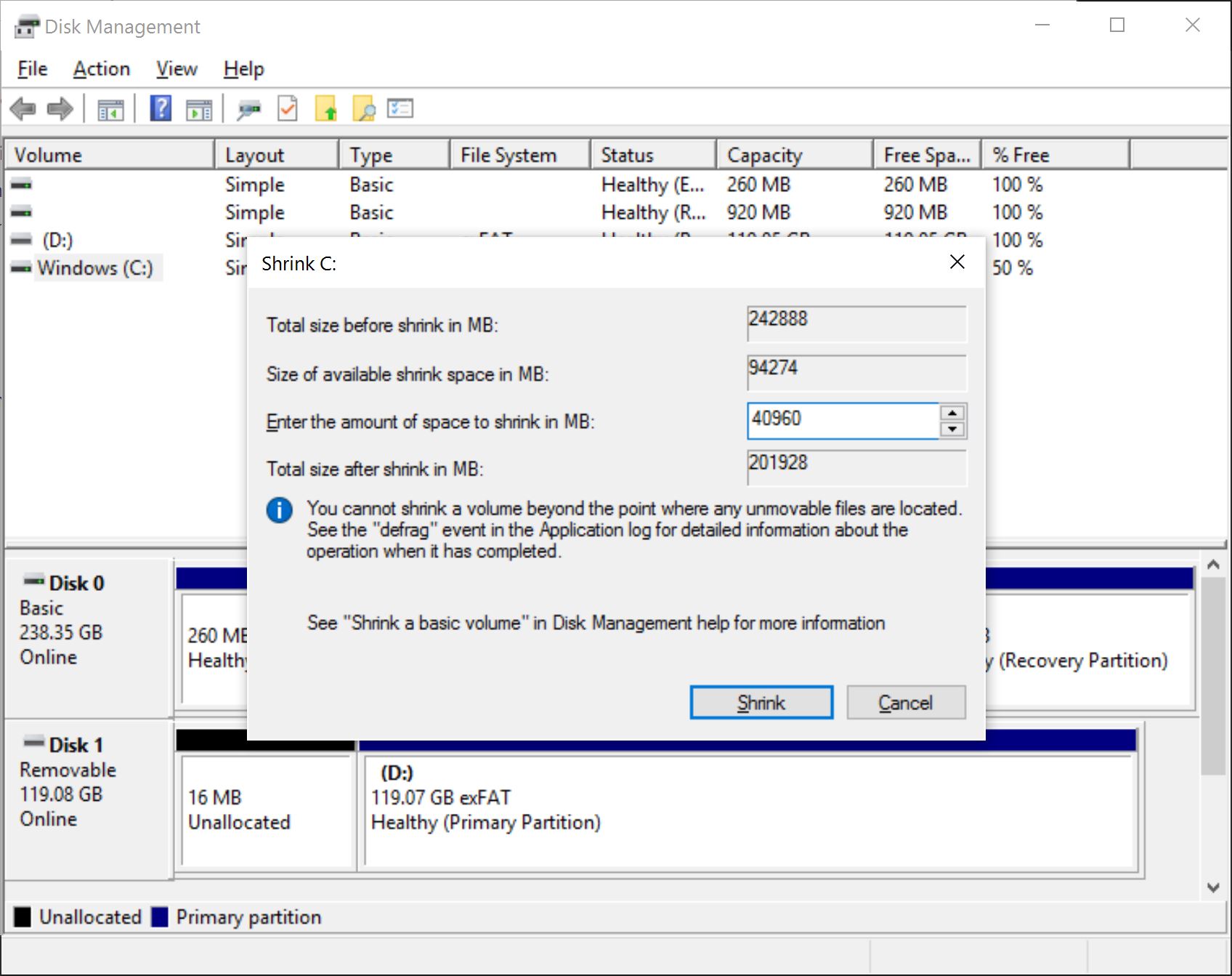 After shrinking the disk you should see an unallocated space showing the size of your new unformatted partition.

Alternatively, if you don’t plan on keeping Windows around, the drive can be wiped later within the Arch install media.

While playing with the partitions, you may want to delete the Windows recovery partition. It takes up unnecessary space, and you’re worried about not having it you can back it up to USB key.

When booting from install media, and eventually when booting your own install, you have to decide if you want to leave secure boot enabled.

To change around the secure boot options, you need to be able to access the UEFI menu.

This section will go through the different options with secure boot..

The simplest option at this stage is to boot into the UEFI menu, and disable secure boot. Unfortunately, when booting with secure boot disabled, you’ll be faced with a nice big red bar at the top when it gets to the Surface logo. If you are fine with that this is the easiest option.

In the UEFI menu under security, you’ll find secure boot. The following options are available:

Select ‘none’ to turn off secure boot.

Option 2: Use a Signed Bootloader

The archiso has a signed bootloader which is supposed to allow booting with secure boot enabled. I was unable to boot using this method but the process is detailed on the arch wiki.

Option 3: Use Your Own Self-Signed Keys

The last option is using your own set of self signed keys. This process is also detailed on the arch wiki and there is a very good resource all about secure boot that goes into detail on the process – Rod Smith’s Controlling Secure Boot.

Next you’re going to want to change the boot options to prioritize USB, or whatever media you are booting from.

Open the UEFI menu and select “Configure Alternate System Boot Order”, Drag whichever option you want to boot from to the top.

You should now be able to stick in a USB drive and boot from it, installing Linux as usual.

I ran into an issue where I could not get certain USB key images to boot. I was also unable to get the images to boot from an SD card. For whatever reason, if you’re having trouble booting an image the normal way, you may want to try installing an alternate bootloader and using it to boot your install media. When I did this, I was able to boot any image, from any device.

I installed the rEFInd bootloader to Windows’ existing boot partition, and changed some settings so that instead of running Windows’ regular bootloader at startup, rEFInd would be run. From rEFInd I could boot from difficult ISO images. This was especially useful because if you just stick a USB key in the Surface and boot from it, you cannot have a keyboard plugged in. In my case wireless was also not working and I was unable to ssh in to the box. To get around this I booted from an SD card, plugged a USB ethernet adapter in, and I was then able to ssh in. Alternately, this also lets you plug in a keyboard and do the installation directly on the device.

Download the bootloader and extract it to a known directory within Windows. Make sure to get the binary zip file.

Setting Up rEFInd as a Bootloader

To setup rEFInd as a bootloader, I opened up the command prompt within Windows and installed rEFInd to Windows existing system partition.

Note: This will NOT remove Windows’ existing bootloader, it will use rEFInd instead. rEFInd can simply be deleted at any time and Windows can be set back to using the original bootloader. 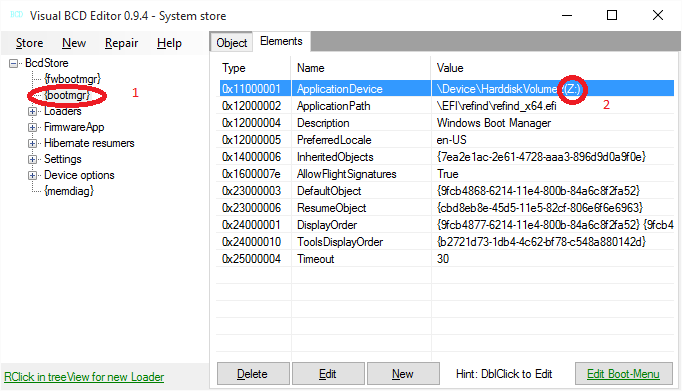 Once booted into the Linux installer, the process should be fairly similar to a regular install.

I decided to use ZFS as my file system using a single pool for ‘root’, which I put on a 40GB partition on the SSD. I then used a separate pool for ‘/home’ that I put on a micro SD card. I won’t be going into detail about my reasoning for how I considered ZFS, if you’re looking for an explanation about how to set it up, and why I did what I did, I describe how to set up ZFS on Arch Linux in detail in previous posts.

Besides the fact that I used ZFS, this process should be very similar with any other file system.

Using my partitioning tool of choice gdisk, I open up the SSD and make a new ‘Solaris root’ partition.

I then proceeded to set up my root pool. If I were not using ZFS, this step would simply be replaced with formatting the partitions using a different file system.

Unmount and export the pool, setup the fstab, and set the boot dataset.

Import the pool at ‘/mnt’ and copy in the cache.

Set ‘tmp’ to be a legacy dataset so that it can be mounted. I set this back later. I then proceeded to mount all of the datasets.

Edit the mirrorlist and bootstrap the system.

Finally I found myself at the main install step. From here on out the steps are fairly similar on any system.

Since I’m using the archzfs repo I need to add the server to pacman.conf.

Setup the bootloader. I use systemd-boot for it’s simplicity (formerly gummiboot).

I also added an entry to boot back to Windows

Find the UUID for Windows.

I like to use netctl for internet access. Once profiles are setup it allows seamless switching between interfaces such as wired and wireless. It will also automatically connect to the internet when an ethernet cable is plugged in.

netctl comes with Arch, but in order to use wireless and have ethernet automatically respond to a cable being plugged in you will need a few packages.

Set up an Ethernet profile

I wasn’t able to get wireless working in the live installer so I set up ethernet leaving Wireless for later.

Set ‘/tmp’ back to zfs mounted

Finally the partitions can be unmounted, and the pool exported.

After rebooting I found myself with a bootable system. That’s a good start.

The first thing I did was create a new zpool for my home directory on the micro SD card.

Next I set up the intel graphic drivers.

Libinput is better with laptops (supposedly).

If you want to auto-login at boot, you can add a dropin file with the following (replace user with actual username). Keep in mind this is not secure at all and will log you in without a password.

I prefer just using openbox, but any window manager or desktop environment will do.

I elaborate on the process of setting up openbox in my previous post about using it on Arch Linux.

We can increase the screen DPI to a usable level.

We know the display specs:

Display size and DPI are sometimes not detected correctly. We can set them explicitly.

Create a config file for xorg

At this point I had a working Archlinux install on my Surface 4 Pro with a simple openbox setup. 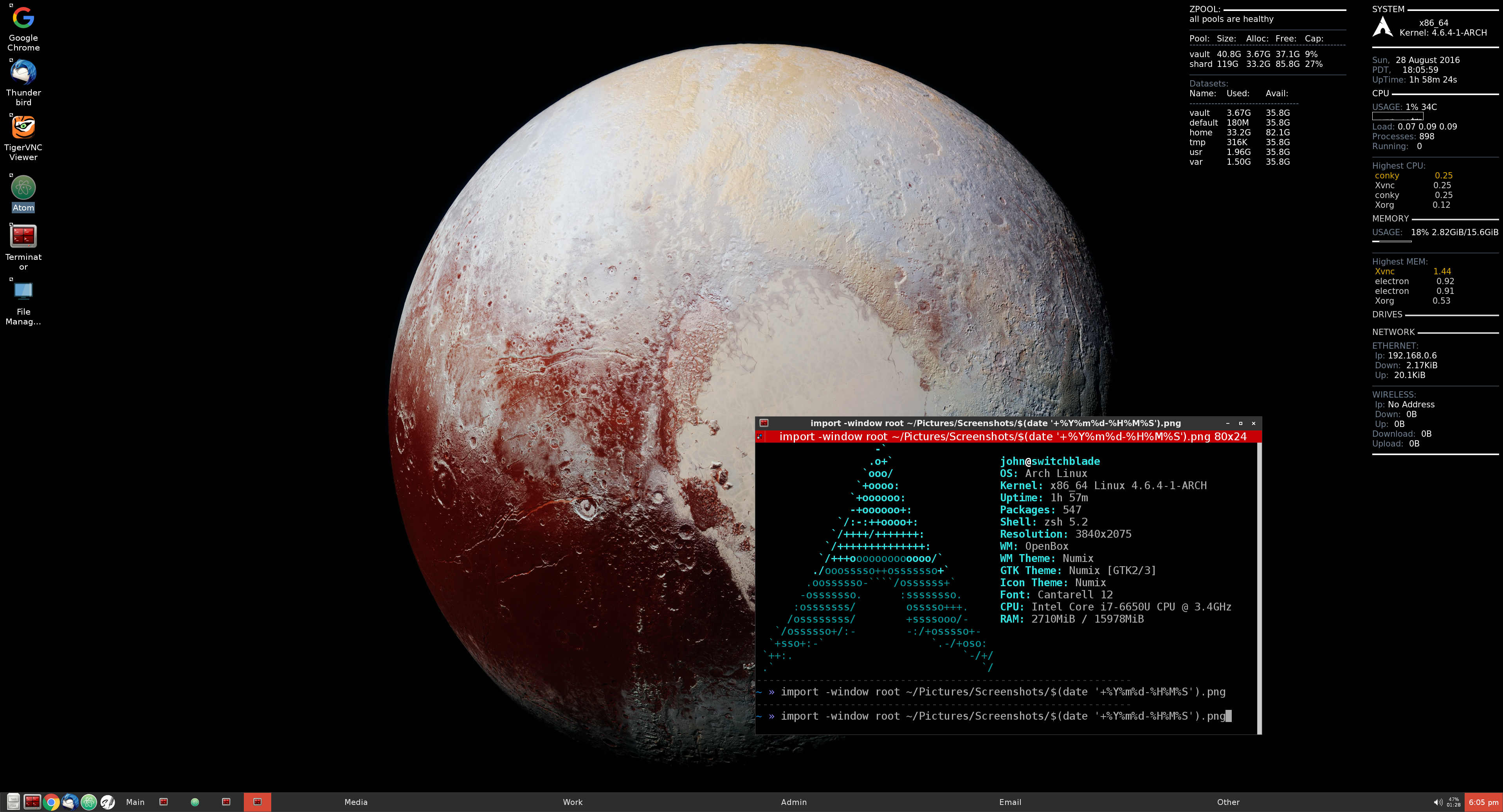 There’s still a lot to set up to make it a working laptop, but from here on out most of it is configuration based on preference. One thing I found after setting up openbox is that, with the high DPI display, it is almost unusable due to the tiny font. Because of the small screen, you need to do some configuration to change the DPI settings. After figuring out how to increase the display size, it is noticeable how beautiful of a display it is.

Something that sets the Surface apart from other popular tablets, is that it doesn’t artificially limit your capabilities. If you want to use it as a laptop, or install alternate operating systems on it, you are free to do so. I think the Surface is going to make a great Linux laptop, and I look forward to spending some time playing with it.